Fehmarnbelt Days 2018: It is not only about infrastructure

Experts of politics and industry tackled the topic “Future transport and logistics in the Fehmarnbelt Region - How to be prepared for changing cargo flows?” in a joint seminar of the Baltic Sea Region projects TENTacle and Scandria®2Act. The event was held on 29th May 2018 during the Fehmarnbelt days 2018 in Malmö.

Lennart Andersson, Regional Director, Swedish Transport Administration Southern Region, and Ingo Egloff, CEO of Port of Hamburg Marketing, welcomed 130 representatives from the Fehmarnbelt core region and also from other parts of Europe to discuss recent and future trends in transport arising from the infrastructure investment at the TEN-T corridors.

In his keynote speech, Martin Zeitler, advisor to Pat Cox, European Coordinator for the Scandinavian-Mediterranean Corridor, shortly pointed to the extremely good performance of the Connecting Europe Facility (CEF) as funding mechanism to enable a European Transport Policy and to developments concerning future calls. He underlined the importance of multimodality at European Policy level which is also reflected in the Issue Papers published by the European Coordinators and the 2018 CEF Transport call for proposals equipped with 450 million EUR investments. On the day before (28 May), Alf Johansen, Leif Lendrup and Wiktor Szydarowski of the TENTacle Project, already had the opportunity to meet with Pat Cox to go through the state of affairs and discuss next steps. He shared his insights on funding opportunities for the infrastructure investments stemming from case investigation and gave suggestions for follow-up work on the prosperity and growth strategy for the borderland area after the completion of the TENTacle project. 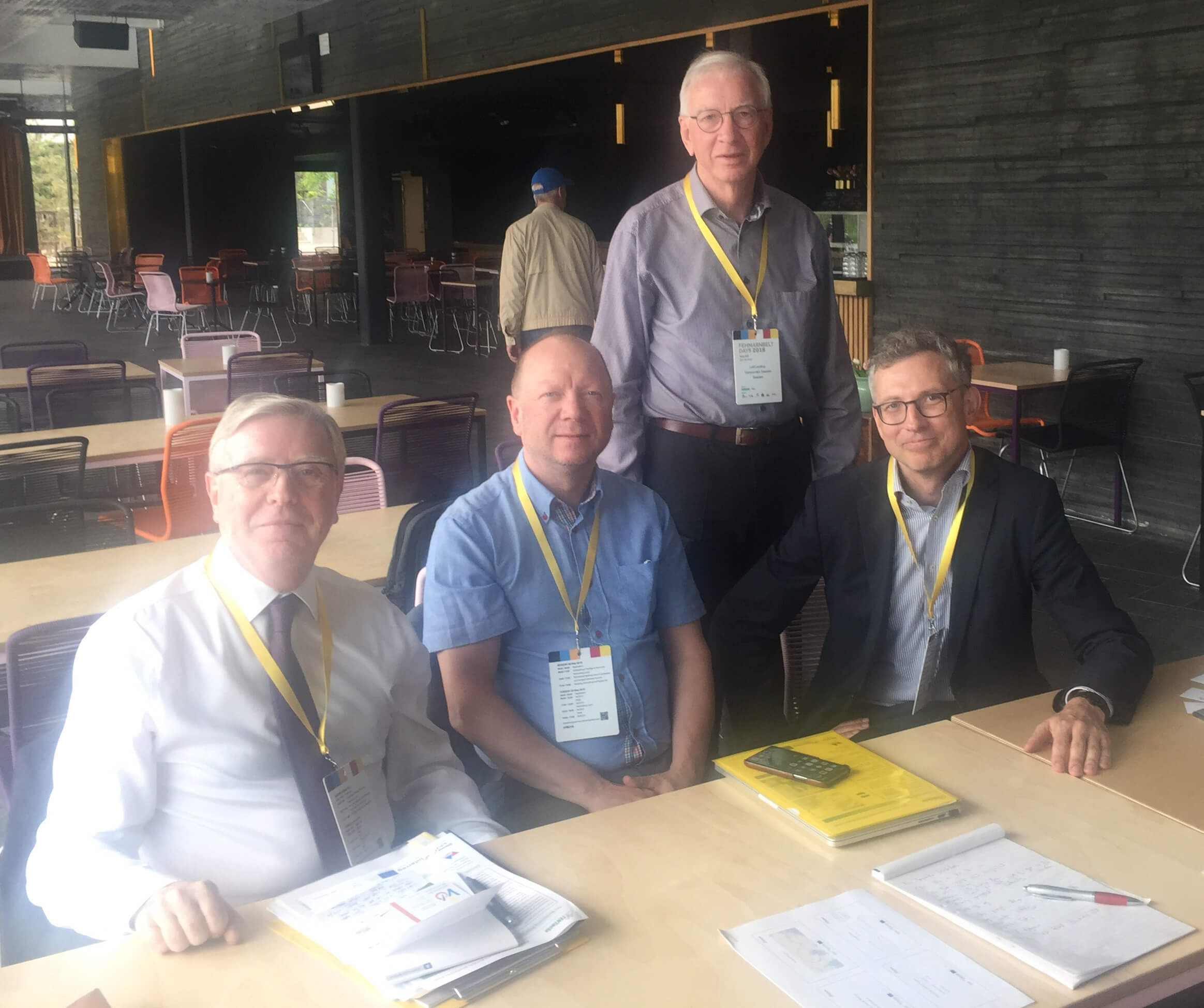 Following the keynote introductions, five speakers in total gave their views on possible effects of the tunnel and their according business models in two sessions, each concluded with a panel discussion moderated by journalist Marc-Christoph Wagner.

Patrik Benrik, analyst for the Swedish Transport Administration, presented the results of a survey part-financed by the Scandria®2Act project. 2,500 truck drivers were interviewed in port areas, while waiting to board ferries leaving Sweden. Mainly transit cargo dedicated for Sweden and Norway were handled on these routes. He raised his concern about the increasing cargo volumes on the road mainly moved by diesel engines, whereas the railways lost significantly in the transport shares. Michael Tasto, Economist and Project Manager at the Institute of Shipping Economics and Logistics (ISL) Bremen demonstrated cargo traffic simulations conducted as part of a study to help understanding the structural impact of the Fehmarnbelt Fixed Link on transport flows across Europe to the audience. The impact is not limited to the coastal areas as ferry lines and already existing fixed links in the region are part of trans-European transport chains spanning across large parts of central and Central-Eastern Europe as well as Scandinavia. He recommended to face the transport flow changes and to adapt business models in due time accordingly: “There is no doubt that changes will happen: It’s wise to prepare for the changes now, instead of hoping they will not come. Tasto concluded: “Be a winner, adapt now!” Maarten de Ridder, Head of International Sales DB Cargo, questioned the assumption that certain ferry lines will cease to exist. There are further important factors as convenience of passengers as well as truck drivers influencing choice of transport modes. While presenting DB Cargo’s intermodal set-up, he raised concern about the performance of the tunnel and adjacent infrastructure for rail freight, especially on German side: “Only if the infrastructure on the German side is ready, businesses and rail operators will follow.” 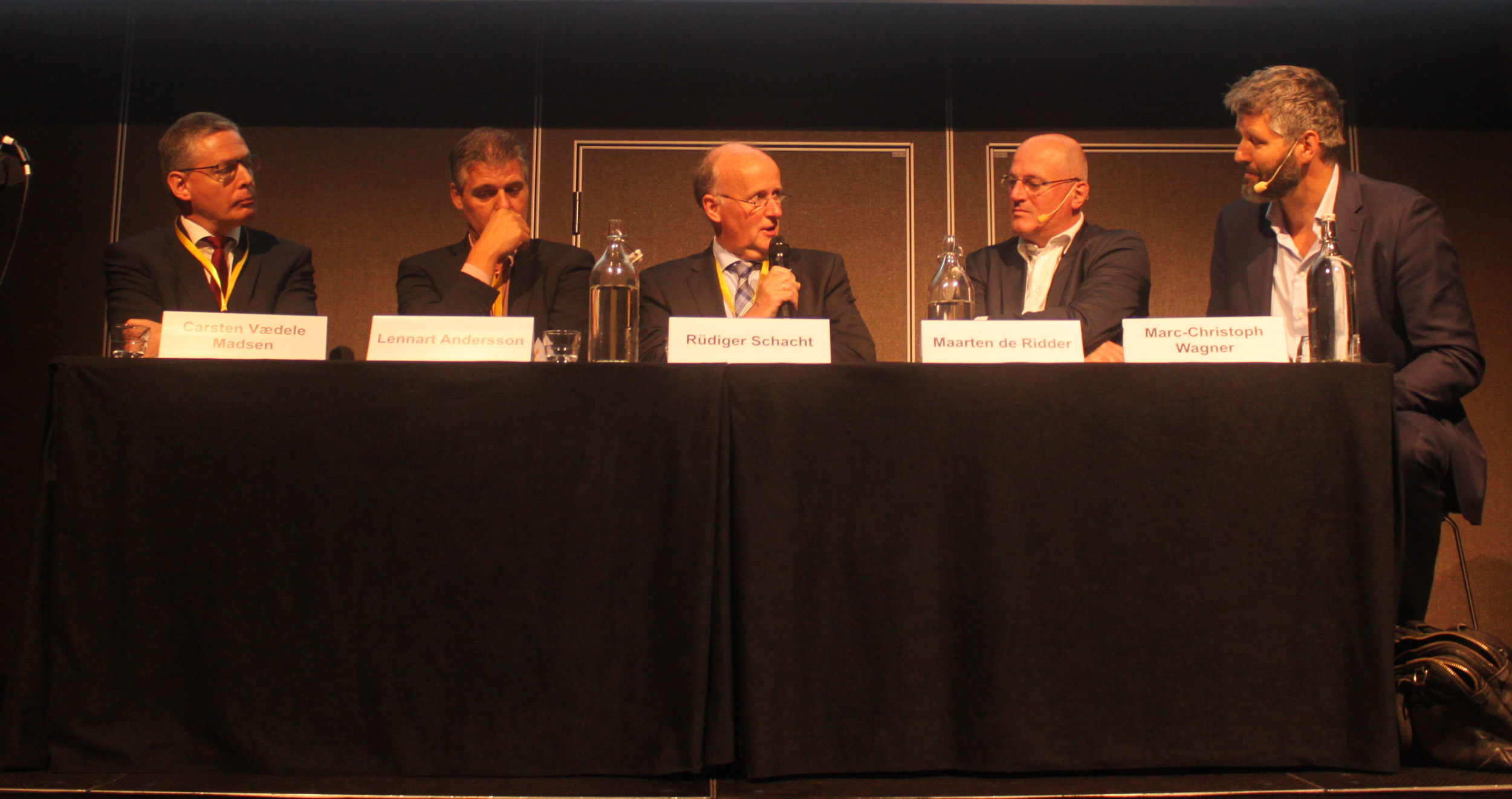 In the first panel all participants agreed on the good co-operation between the different regions. Lennart Andersson, Regional Director of the Swedish Transport Administration, explained when asked whether cross-border cooperation was sufficient, that Swedish and Danish colleagues very well collaborate, informing each other about investment plans. In contrast to other findings presented later in the panel, he stated that the capacity of the Öresund Fixed Link will be sufficient once the Fehmarnbelt tunnel has been opened. His Danish counterpart Carsten Vædele Madsen, Senior Advisor at the Danish Ministry of Transport, Building and Housing, confirmed this assumption. Bottlenecks on Danish side are mainly the rail connection to Kastrup airport which will be upgraded before the tunnel is fully operational. Rüdiger Schacht, Deputy Managing Director and Head of Regional Economic Policy at the Chamber of Commerce and Industry Lübeck, stressed that despite current delays due to court procedures, Germany is very committed to the Fehmarnbelt Fixed Link after chancellor Merkel singed an official agreement in 2008. Hinterland connections from Lübeck will be upgraded by 2024 and a new Storesund bridge will be built by 2028. Maarten de Ridder questioned the need of a second fixed link over the Öresund. In his perspective, one should rather fully utilise the existing capacities. Concentration of rail freight might be one way: why to provide rail ferries via Trelleborg and Ystad thus dividing volumes and not concentrating on one rail freight port instead?

The second panel discussion focused on development opportunities for regions and private actors. Mikkel Wesselhoff, CEO Business Lolland-Falster, and Dr. Petra Stelling, Infrastructure Strategist at Region Skåne, presented analyses and derived business models for their respective regions. Petra Stelling did not share the expectation, that the Öresund fixed link will be able to manage the growing traffic volumes, especially since the transport policy of Region Skåne demands to strengthen rail traffic. This will also add additional volumes to the Öresund bridge. The study expects that railway capacity utilisation in 2030 will be at 155 %, meaning that current capacity on rail tracks could manage only 2/3 of expected traffic. 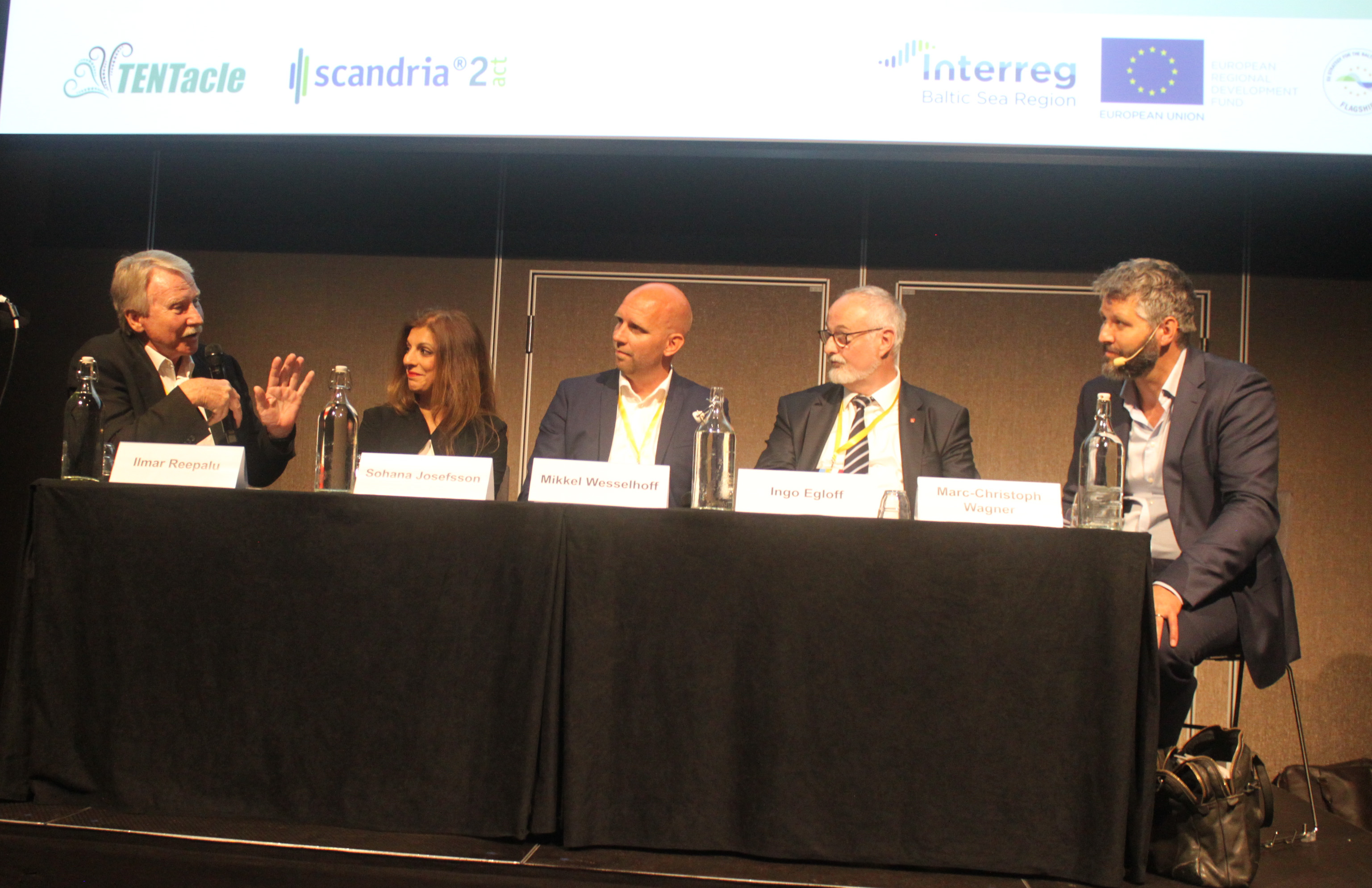 During the discussion Ingo Egloff stressed that although there are still a lot of challenges to be faced before the Fehmarnbelt tunnel is open, there are also huge business opportunities. A new, faster connection to Denmark will turn the Port of Hamburg towards an entry point for Asian imports to the Scandinavian market. Sohana Josefsson, Director HR and Communication at Green Cargo AB, explained the difficulties rail transport is facing and spoke out for a level playing field for rail freight both compared to road transport as well as to rail passenger transport. In recent years, capacities for passenger transport were increased, while those for freight transport stagnate. “People vote, my trains don’t.”, she concluded. For Ilmar Reepalu, First Vice Chair of Skåne’s Regional Development Committee, sustainability and multimodality will be the defining factors in whether the Fehmarnbelt Fixed Link will be considered a successful infrastructure investment. Transport by ferry and short sea shipping should also be considered in regional development plans and business models. Mikkel Wesselhoff once more stressed that the time to act is now and we should stop talking as if this fixed link is not coming, but finally start thinking about how to fully utilize it to our benefit.