Regions, Corridors and Urban Nodes – Competences, Capitalisation and Cooperation in the BSR

The final joint conference of the three Flagship Interreg BSR Programme projects, NSB CoRe, Scandria®2Act and TENTacle titled Regions, Corridors and Urban Nodes – Competences, Capitalisation and Cooperation in the Baltic Sea Region (BSR) took place in Brussels on March 6, 2019.  The European Union-funded initiatives work on the development of the Trans-European Transport Network (TEN-T) core network corridors in the BSR to create an environmentally sustainable, innovative, and efficient transport system that is cohesive and beneficial to European citizens throughout the continent.  Aside from the project representatives, the conference was attended by high-level regional and national elected officials as well as EU representatives. During the event, members of several panels discussed achievements, challenges, and best practices learnt during the program ahead of the 2030 deadline.

Each of the three projects has its own objectives and therefore its own set of obstacles. NSB CoRe brings together transport and spatial planners to improve interaction and cohesion between local and transnational TEN-T implementation, and to overall facilitate an open dialogue among local, national, and EU-level decisionmakers. The TENTacle project – comprised of seven regional pilot cases – focuses on urban nodes and balancing the goals of transport intermodality and interoperability with sustainable urban mobility. The Scandria®2Act project intents to advance connectivity of corridor regions while minimizing transport’s negative impact on the environment. Its goals include “harmonized clean fuel deployment” and development of related infrastructure within the Scandria®Corridor along with studies on incentives and financing of “multifuels and multimodes.”

Heral Ruijters, Director Investment, Innovative and Sustainable Transport at DG MOVE (European Commission), Petri Sarvamaa, Member of the European Parliament and Kurt Bodewig, European Coordinator Motorways of the Sea, welcomed representatives of the three projects and all participants in Brussels. Although Mr. Bodewig could not attend in person, a pre-recorded message was streamed to the audience. Klaus-Uwe Sondermann, managing director at KombiConsult GmbH led through the event.

The first panel “Into the sixth year of the core network corridor implementation. Achievements vs. persisting challenges” featured official representatives in charge of the TEN-T core network corridor (CNC) development. Pat Cox (European Coordinator Scan-Med Corridor), Catherine Trautmann (European Coordinator North Sea-Baltic Corridor), Anne E. Jensen (European Coordinator Baltic-Adriatic Corridor) discussed achievements, challenges, and hopes with Kaarin Taipale (Member of the Board Helsinki-Uusimaa Regional Council, lead partner of NSB CoRe), Kathrin Schneider (Minister for Infrastructure and Spatial Planning of the Federal State of Brandenburg, Lead Partner of Scandria2Act) and Lennarth Förberg (Chair of the Regional Development Board, Region Blekinge, Lead Partner of TENTacle). The countries in the Interreg BSR Programme include Sweden, Finland, Denmark, Estonia, Latvia, Lithuania, Poland, Germany, and Norway. The level of cooperation, as well as local and regional government involvement in the projects, was praised, while the issues of the ongoing need for funding, were presented as the burgeoning challenges for the TEN-T initiative.

The panellist discussed the “need to fill (the) corridors with life,” the growing concerns for road safety, highway congestion problems, and climate change. At the same time, the panellists underscored that the projects are already zooming in on these problems by reducing travel time and improving road connections which helps cut CO₂ emissions and brings businesses to remote areas in need of economic development.

Of most importance were issues related to the environment and funding, both of which are obviously very closely linked to all methods of EU transport policies. In his remarks on sustainability, Pat Cox, had some strong words. “The level of greenhouse gas emissions from transport is going the wrong way,” said Cox. “We are losing the battle. We are not winning the battle (…). For 2020, most EU states will not hit their targets. The 2020 targets are lowball targets compared to 2030, 40, and 50. If we’re not hitting 2020, it’s a wake-up call that we’re not in the game. If we’re running a race against time, we’ve got to speed up.”

Difficulties related to funding were mentioned repeatedly throughout the conference. While some innovative solutions have already been incorporated in TEN-T, such as blended financing of EU and private sector’s funds, the coordinators at times run into unforeseen situations mid-project: “We also see, all the time, new things coming up,” said Anne Jensen. “For instance, in Poland, so many things are happening that the economy is overheating and all of a sudden you have a cost overrun on some of the projects and you have to find more funds.” But Jensen was optimistic about the TEN-T projects overall and the commitment from the EU to develop an advanced transportation system. She spoke about the exciting changes for the continent with the development of her corridor which will provide landlocked countries and industries with access to the seas. This offers new opportunities for businesses and shipping thus making it relevant for intra-European trade.

The human factor in transport was also highlighted. The speakers brought up the importance of recognizing that the TEN-T initiative is about connecting people to other communities, providing better job prospects and business opportunities, access to hospitals and schools, that the corridors are not just “lines on a map,” as Herald Ruijters put it.

Catherine Trautmann elaborated on the social aspects and consequences of marginalization of some groups, particularly in the rural areas. Trautmann spoke about Brexit and the Yellow Jackets protests in France as examples of the type of social unrest that materializes when communities feel isolated and “not in the game.” In Trautmann’s view, the success of the corridors is directly linked to levelling the playing field for these groups which improved transport can do.

In the first session lead by representatives from the Scandria®2Act project under the headline of Competences, the panel discussion shifted into more detail on building cohesion in large projects and urban nodes while addressing the clean fuel deployment and the utilization of Intelligent Transport Systems (ITS) and Mobility as a Service (MaaS).

Here, the speakers highlighted the crucial aspect of an open multi-level dialogue among operatives from the European Union, the Member States, and stakeholders, especially when it comes to funding and sharing knowledge. Multi-level governance is needed, in line with its fundamental objectives of achieving greater economic, social and territorial consistency, to reduce the administrative and legal burdens for projects and to make it easier for experts in different regions to find each other and form cohesive partnerships. 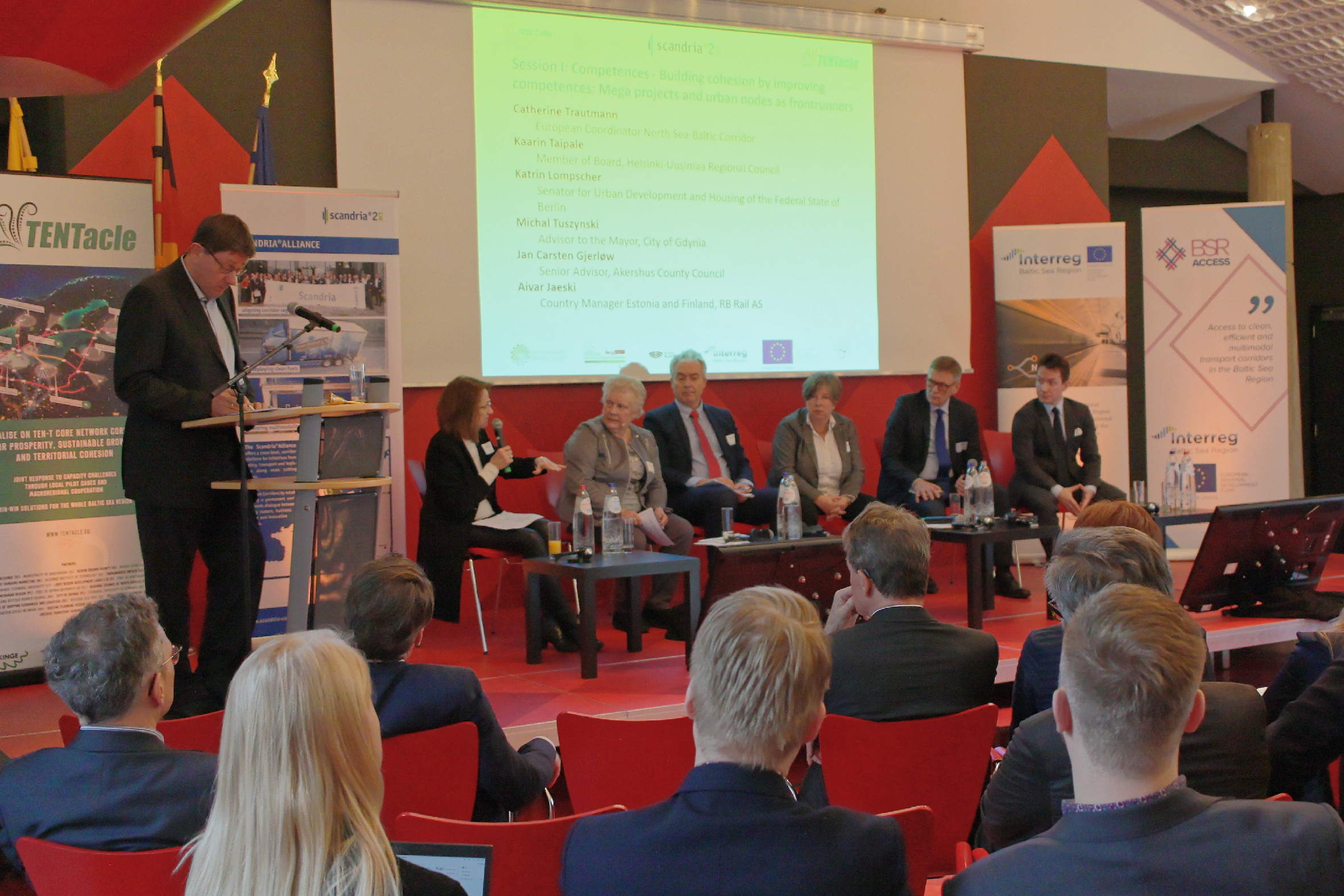 “We’re talking about competence sharing within the projects, and matchmaking between professionals and policymakers,” said Kaarin Taipale. Ultimately, the goal is “to break silos,” as Taipale concluded.

Additionally, Dr. Michał Tuszyński, who represented Gdynia Municipality, called urban nodes the “key players for the success of the TEN-T initiative” and port cities “the engines of growth in Europe.” Aivar Jaeski, Rail Baltica Country Manager Estonia and Finland, highlighted the trans-European project’s positive influence on trade and transport capacity in the region as well as improved accessibility to medical care, universities, and cultural events. The greenfield rail will link Finland, Estonia, Latvia, Lithuania and Poland to a European standard gauge rail line.

The issue of sustainability was also raised in this session as it relates to the issue of promoting alternative fuelling options. The Clean Fuel Deployment Strategy within Scandria®2Act has been concentrating on clean fuel development in the BSR region, with consideration for electricity, hydrogen, and natural gas.

“There is no one instrument that fits all regions and countries,” said Jan Carsten Gjerløw, Akershus County Council Senior Advisor. “That’s where the Clean Fuel Deployment comes in to figure out an option that works best for a specific country.” To make the process easier, Gjerløw said that incentives as well as sharing information and experiences are of most benefit when it comes to shifting towards green transport.

In the second session panel discussion, titled Capitalisation: Reaping benefits of large infrastructure projects on the corridors and organised by the TENTacle project, the speakers touched on issues such as coherent cross-border transport planning, integration and improved accessibility for remote areas, and increased awareness about large infrastructure investments along with proper branding strategies.

The panel illustrated that the benefits of large infrastructure projects go way beyond just the immediate vicinity of the site of the project. The advantages of such projects also affect communities long-term and on a fundamental level for years to come. This message is often lost in a cost-benefit analysis as well as in communication with stakeholders. Consequently, when developing a strategy for a project, the need for active dialogue with people as future users and customers is necessary to “build joint ownership of the vision.”

The large projects also need cross-border collaborative planning. “We need better planning methodologies,” said Stefan Engdahl, Executive Director, Market and Planning at the Swedish Transport Administration. “We also need better prognosis methods that have the same basis when we calculate the future and the demand of transport.”

Engdahl also underscored the need for a “firm and active commitment from EU Corridor Coordinators and EU” to uphold the efforts to “strengthen Core Network Corridors (CNC) implementation.” 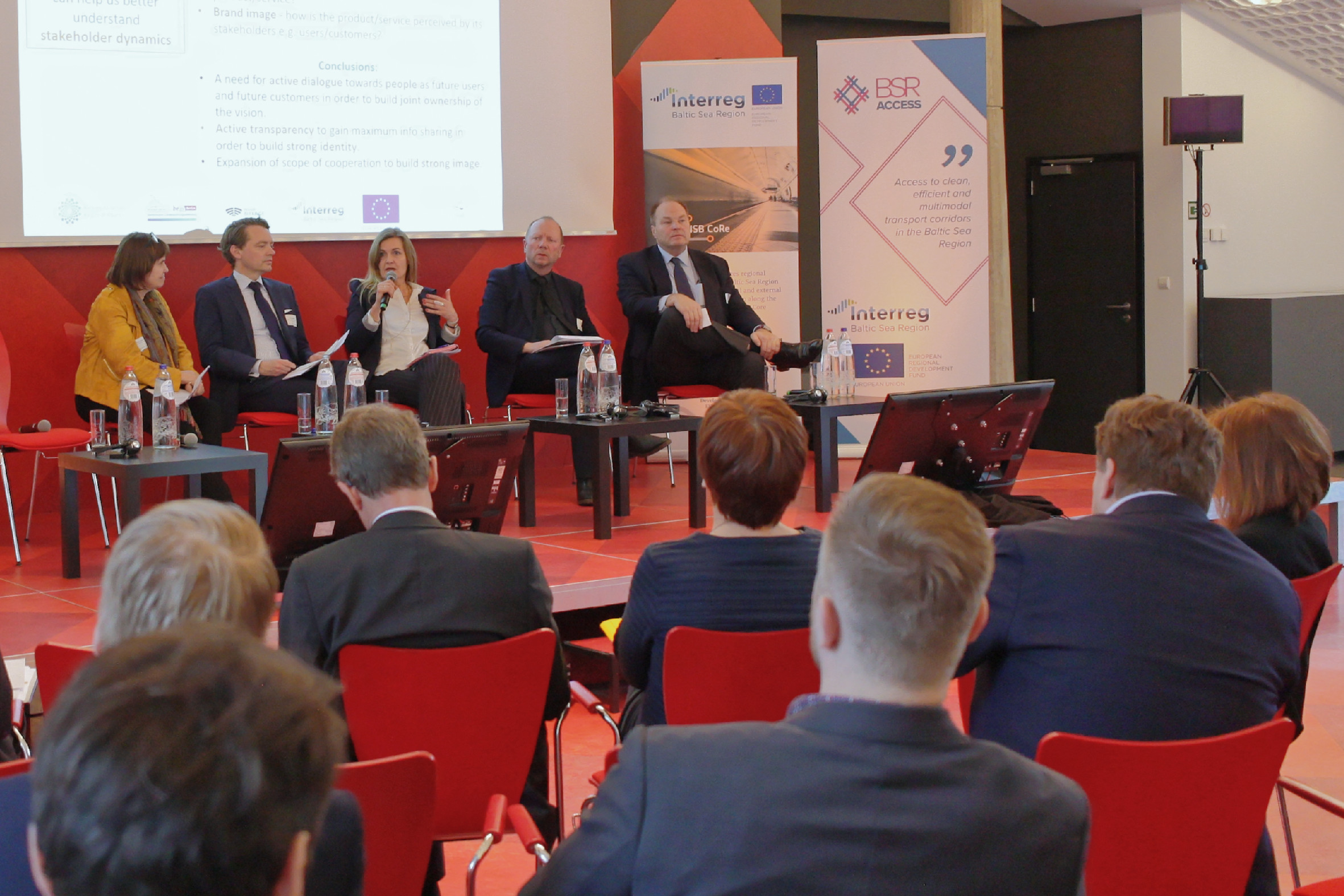 Thomas Becker, Managing Director of STRING, said that EU should take care of large project infrastructure because individual countries – their governments – don’t have a cross-border mind-set. “I’m not that convinced of infrastructure for the sake of infrastructure,” said Becker. “I’m convinced that you need to decide what the regions affected by a certain infrastructure project, what they should develop into before you install the infrastructure.”

The panel lead by NSB CoRe concluded the conference under the banner of Collaboration:Alliances for innovative implementation strategies. Panellists discussed responsibility of multi-level governments to engage in active and permanent dialogue with each other as well as local communities and clean fuel incentives. Topics as the general necessity of long-term vision in transportation planning and incorporation of multimodality in cargo and passenger transport were also touched upon. 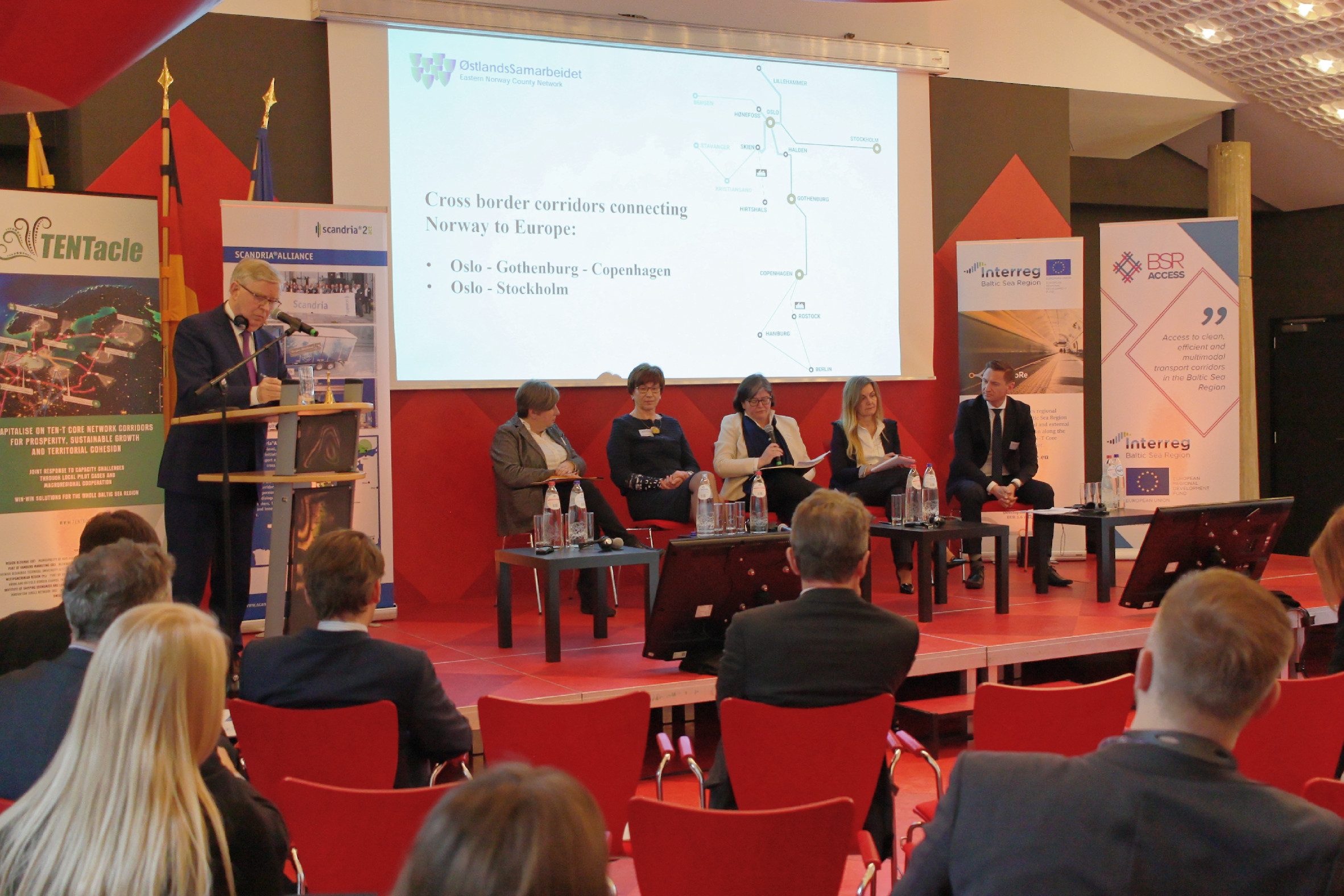 On clean fuels, Anette Solli, Regional Mayor of Akershus County Council and Founding Partner of the Scandria Alliance, pointed out that only one percent of European vehicles are zero-emissions. The incentives that work well in this aspect, in terms of government involvement, include financial breaks (especially upfront reduction in price) when purchasing a vehicle – whether zero emissions or hybrid.  Additionally, multimodal transport is another green solution that’s increasingly popular. It involves using different modes of transport for the same trip. Multimodality helps in keeping transport sustainable and well integrated.

At the end of the conference, the panellists reinstated the role of transportation as a link between communities and a way to reach marginalized groups to bring about positive economic and quality of life changes. In order to achieve that, collaboration and cooperation among the European countries, on government-level, as well as among stakeholders, is crucial.

Closing remarks were given by two members of the European Parliament, Michael Cramer, and Gunnar Hökmark, and Thomas Erlandson, Coordinator for Policy Area Transport in the EU Strategy for the BSR.